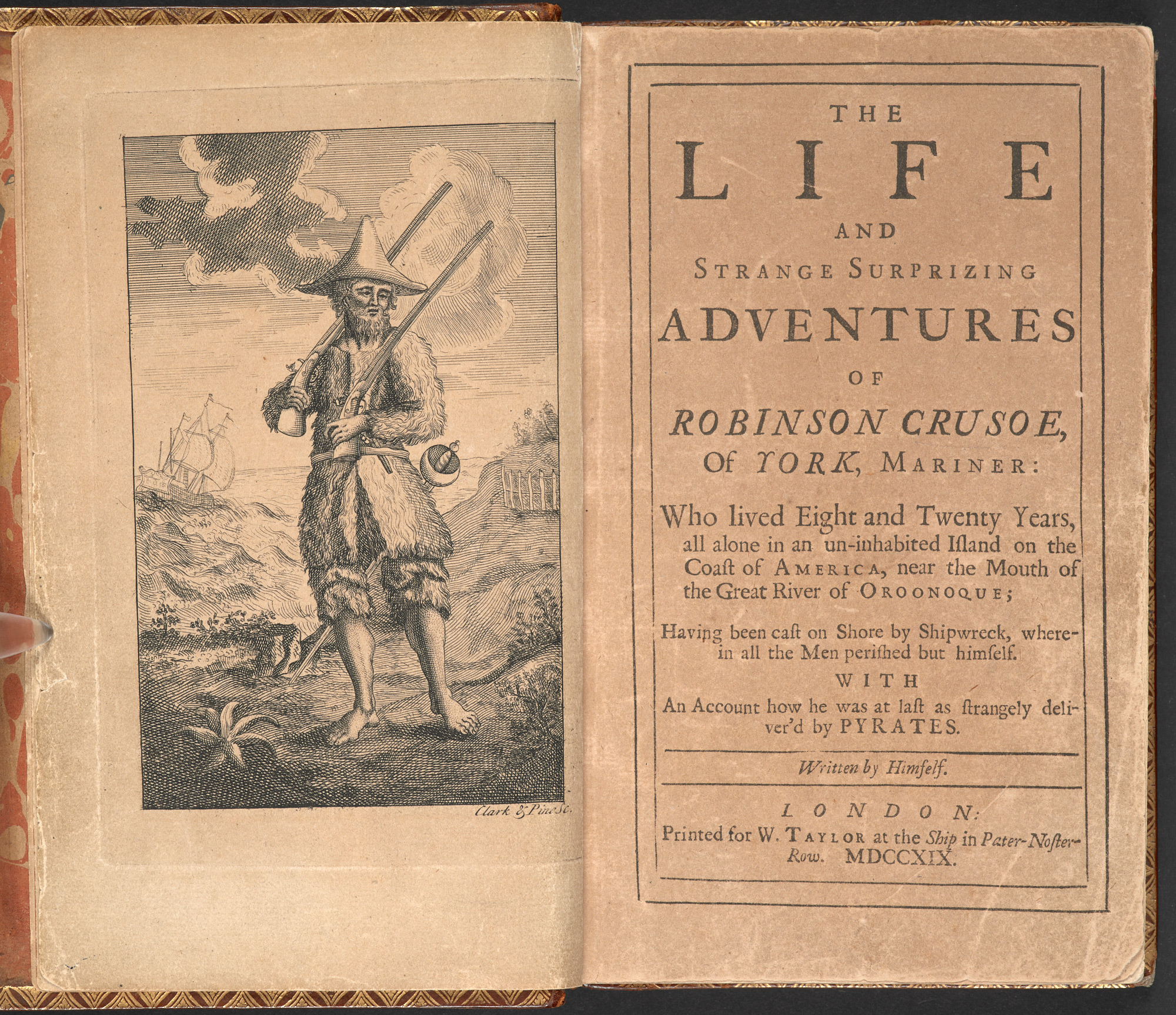 The Life and Strange Surprizing Adventures of Robinson Crusoe, of York, Mariner: Who lived Eight and Twenty Years, all alone in an un-inhabited Island on the Coast of America, near the Mouth of the Great River of Oroonoque; Having been cast on Shore by Shipwreck wherein all the Men perished but himself. With An Account how he was at last as strangely deliver'd by Pyrates. Written by Himself. William Taylor, 1719. 364 pages

Classic tale of survival on a deserted island. Inspired by the real-life adventure of British privateer Alexander Selkirk, who was marooned on the island of Juan Fernandez off the coast of Chile, for four years before being rescued by Woodes Rogers in 1709. Followed by The Farther Adventures of Robinson Crusoe : being the second and last part of his life, and of the strange surprizing accounts of his travels round three parts of the globe (1719) and Serious reflections during the life and surprising adventures of Robinson Crusoe : with his Vision of the angelick world (1720). 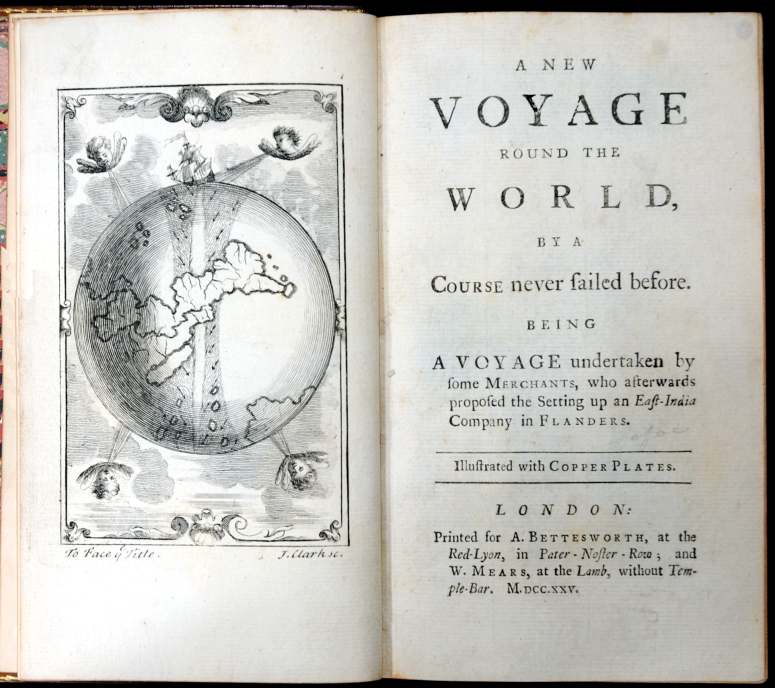 A New Voyage Round the World, by a course never sailed before. Being a voyage undertaken by some merchants, who afterwards proposed the setting up an East-India company in Flanders. A. Bettesworth, 1725. 2 volumes

An entirely fictional account, in the style of Dampier's epoch-making accounts of his genuine voyages. 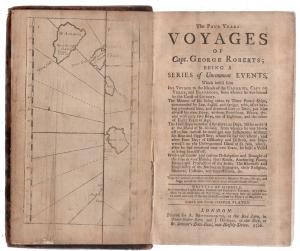 The Four Voyages of Capt. George Roberts : being a series of Uncommon events, Which befell him In a Voyage to the Islands of the Canaries, Cape de Verde, and Barbadoes, from whence he was bound to the Coast of Guiney. The Manner of his being taken by Three Pyrate Ships, commanded by Low, Russell, and Spriggs, who, after having plundered him, and detained him 10 Days, put him aboard his own Sloop, without Provisions, Water, &c. and with only two Boys, one of Eighteen, and the other of Eight Years of Age. The Hardships he endur'd for above 20 Days, 'till he arriv'd at the Island of St. Nicholas, from whence he was blown off to Sea (before he could get any Sustenance) without his Boat and biggest Boy, whom he had sent ashore; and after Four Days of Difficulty and Distress, was Ship-Wreck'd on the Unfrequented Island of St. John, where, after he had remained near two Years, he built a Vessel to bring himself off. With a particular and curious Description and Draught of the Cape de Verd Islands; their Roads, Anchoring Places, Nature and Production of the Soils; The Kindness and Hospitality of the Natives to Strangers, their Religion, Manners, Customs, and Superstitions, &c. Together with Observations on the Minerals, Mineral Waters, Metals, and Salts, and of the ... with which some of these Islands abound. Written by Himself, And interspers'd with many Pleasant and Profitable Remarks, very instructive for all those who use this Trade, or who may have the Misfortune to meet with any of the like Distresses either by Pyracy or Shipwreck. Adorn'd with several Copper Plates. A. Bettesworth, 1726. 458 pages 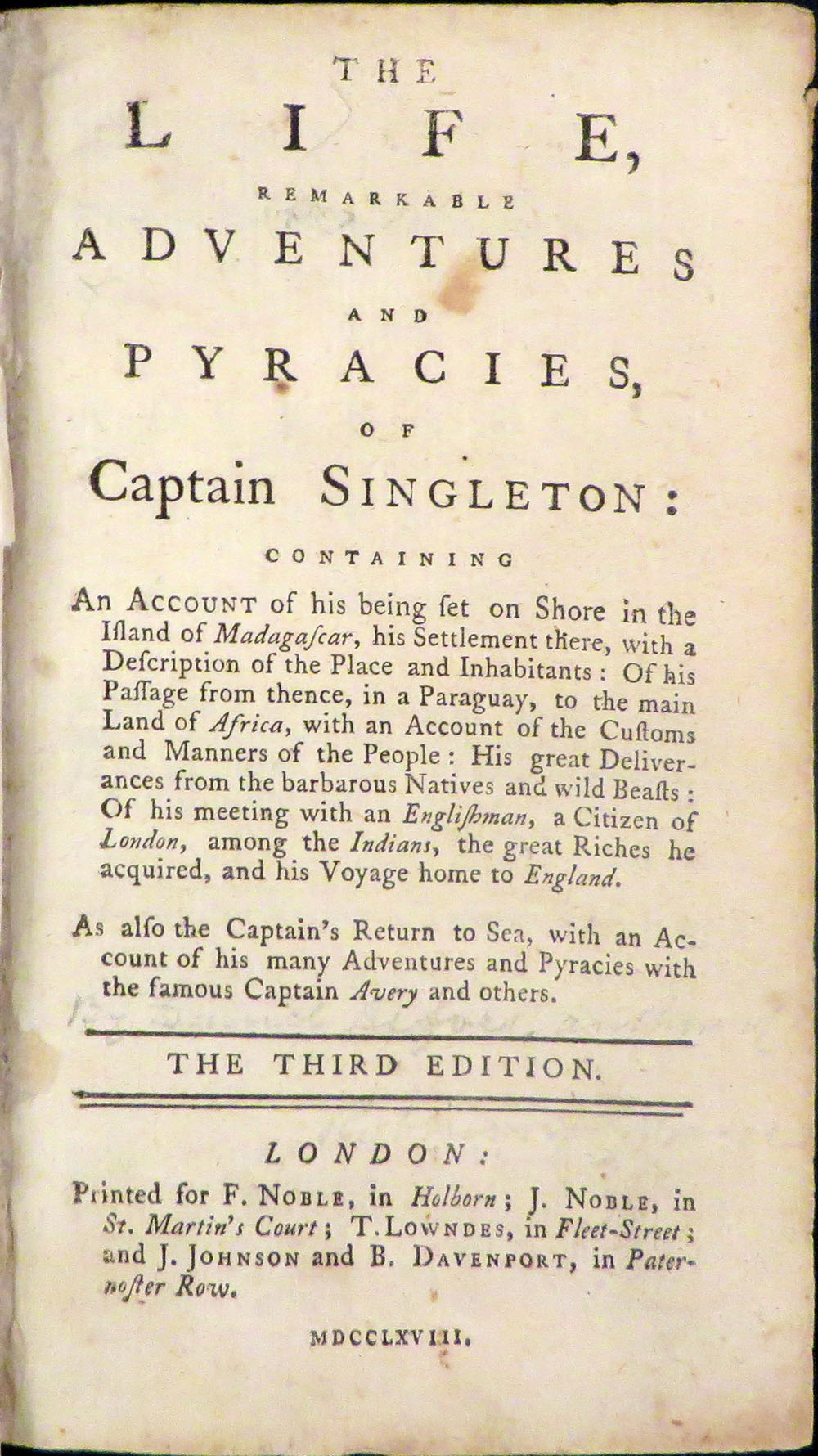 The Life, Adventures, and Pyracies of the Famous Captain Singleton: Containing an Account of his being set on Shore in the Island of Madagascar, his Settlement there, with a Description of the Place and Inhabitants: Of his Passage from thence, in a Paraguay, to the main Land of Africa, with an Account of the Customs and Manners of the People: His great Deliverances from the barbarous Natives and wild Beasts: Of his meeting with an Englishman, a Citizen of London, among the Indians, the great Riches he acquired, and his Voyage Home to England: As also Captain Singleton's Return to Sea, with an Account of his many Adventures and Pyracies with the famous Captain Avery and others. J. Brotherton, 1720. 360 pages 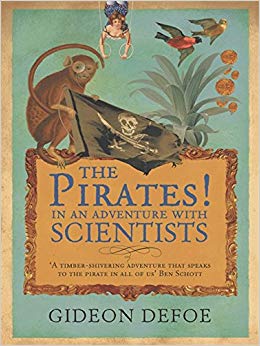 The adventures of "The Pirate Captain" and his crew of non-orthodox pirates. They meet a young Charles Darwin and Mister Bobo, a highly trained and sophisticated "man-panzee", who have been exiled from London by a rival scientist. Having sunk The Beagle, which he believed was a Bank of England treasure ship thanks to a tip-off from Black Bellamy, the Pirate Captain agrees to take Darwin home and help him defeat his enemies. 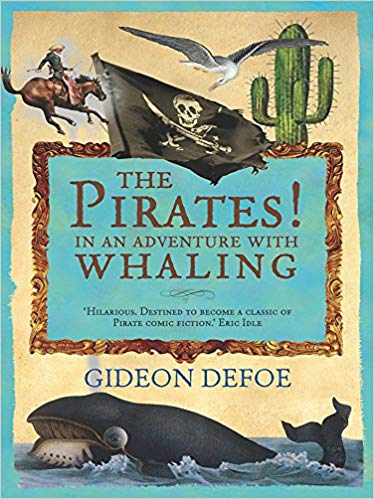 U.S. title: The pirates! : in an Adventure with Ahab. Reissued under the title The pirates! : in an Adventure with Moby Dick. Fresh from their mishaps with Charles Darwin and the evil Bishop of Oxford, the Pirates set sail in a bouncy new vessel -- purchased on credit. In order to repay his debts, the Pirate Captain is determined to capture the enigmatic White Whale, hunted by the notoriously moody Ahab, who has promised a reward. Chaos ensues, featuring the lascivious Cutlass Liz, the world's most dangerous mosquito, an excerpt from the Pirate Captain's novel in progress (a bodice ripper, of course), whale ventriloquism, practical lessons in whale painting, a shanty- singing contest in a Las Vegas casino, and a dra-matic climax in which the Pirate Captain's prize ham saves the day! < 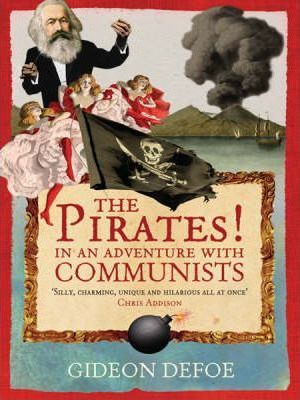 The Pirate Captain - his disguise proving something of a letdown - finds himself incarcerated in Scotland Yard, in a case of mistaken identity. Discovering that his doppelganger is none other than Karl Marx, the Captain and his crew are unwittingly caught up in a sinister plot to discredit the communists: a plot that involves a red-eyed monster, stolen waxworks and a sack of pretend kittens. 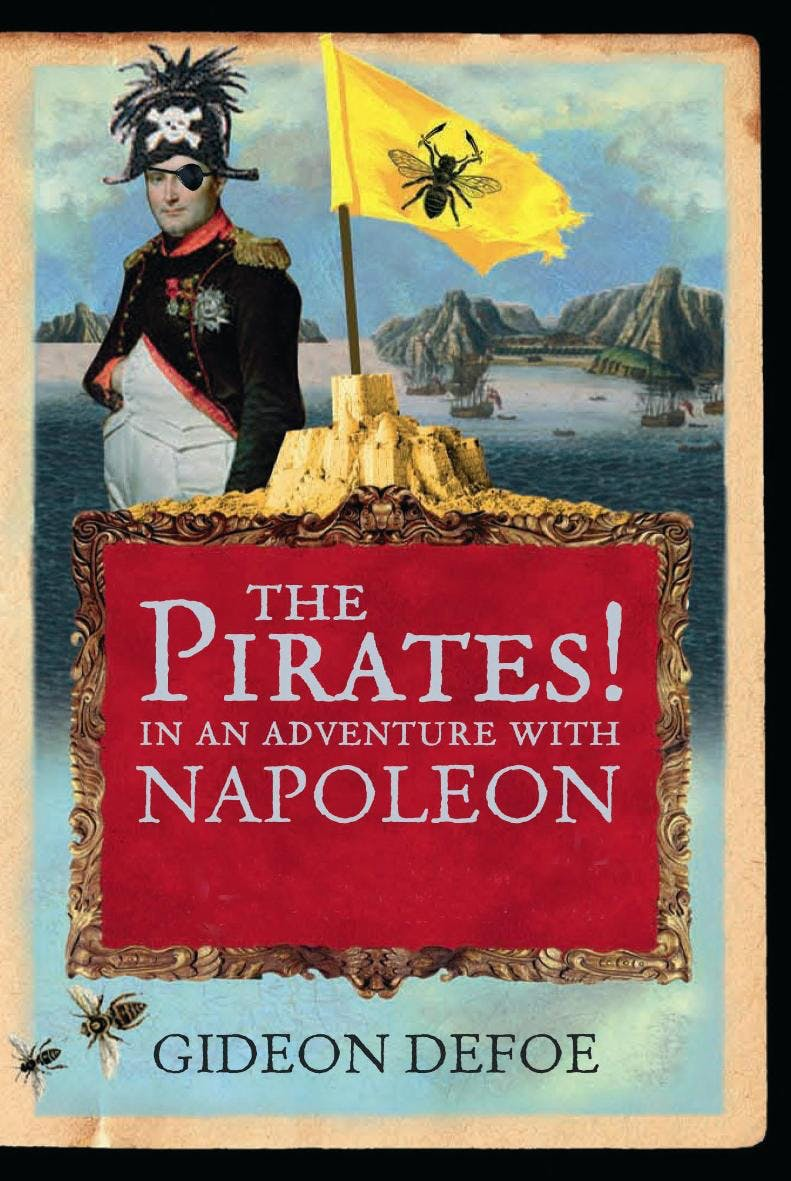 The Pirate Captain and his merry band of ne'er-do-wells face off against their toughest--but by no means their tallest--challenge yet, in this swashbuckling tale of lavish tea parties, educational museum exhibits, and naked political ambition. 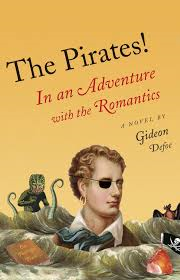 The pirates! : in an Adventure with Romantics, or Prometheus versus a terrible fungus. Weidenfeld & Nicolson, 2012. 306 pages

Our nautical heroes’ latest encounter is with no less than the literary greats of their age: the swaggering Lord Byron, the oddly shifty Percy Shelley - and his beautiful young wife Mary. Together they embark upon a quest that will take them from the bowels of Oxford all the way to a forbidding Transylvanian castle. A quest that forces the Pirate Captain to confront some important questions: what is the secret behind his mysterious belly tattoo? How do Charles Babbage and a lost treatise by Plato fit into all of this? Is "Zombuloid, the corpse-beast that walks like a man" a better name for a monster than "Gorgo, the terrible fungus"? And, most importantly, what happens when the Pirate Captain finally falls in love? 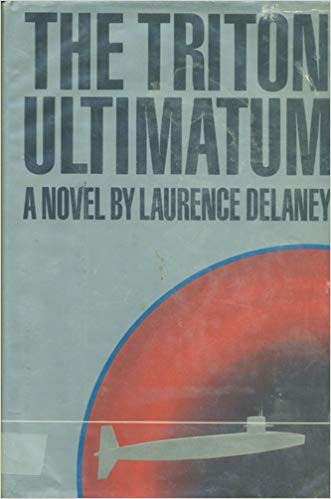 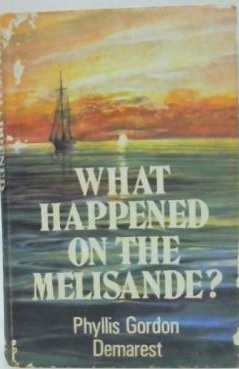 Murder mystery aboard the 65' MELISANDE in the South Pacific. 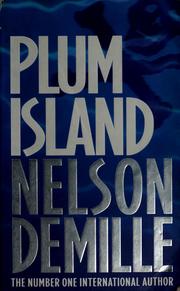 Injured detective gets involved in investigating the murder of two friends who worked at a research facility rumored to be a germ warfare center. While the general belief is that they were offed in a germ sale or drug deal gone bad, the detective finds evidence for a pirate treasure hunt gone sour. 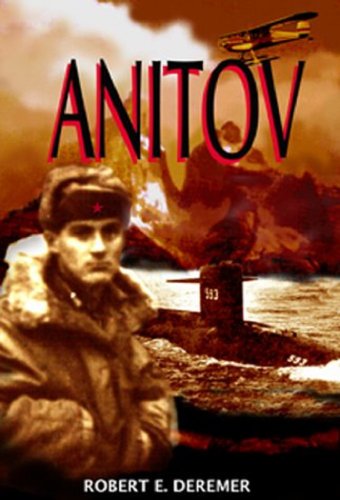 A hybrid United States Nuclear Attack Submarine loaded with SubRoc torpedoes, a 129-man crew, and millions of dollars of American technology, disappears without a trace. While conducting a deep dive test in the north Atlantic, her last sea trial prior to assignment to Combat Patrol, the U.S.S. Thresher (SSN-593) inexplicably was cut off in her last radio transmission. After months of investigation, the United States Navy informed the American public, and the world, that the loss of the Thresher was an accident caused by a malfunctioning seawater pipe. But buried deep in the vaulted archives of the Pentagon is a volume of ultra-secret files that reveal much more about that suspect pipe and what really happened to the Thresher. In Russia on the shore of Lake Baikal, lives a now older and retired Soviet Naval Officer who wore no ribbons of honor but has a similarly buried military file that documents his being awarded the Highest Medal of Valor to exist in the Soviet Military. 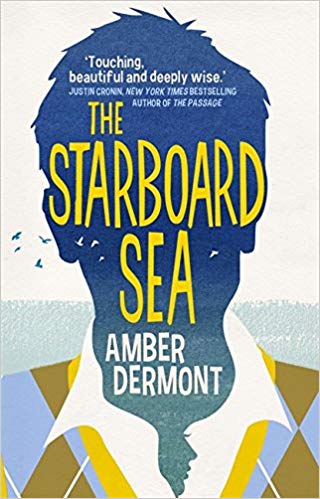 Jason Prosper grew up in the elite world of Manhattan penthouses, Maine summer estates, old-boy prep schools, and exclusive sailing clubs. A smart, athletic teenager, Jason maintains a healthy, humorous disdain for the trappings of affluence, preferring to spend afternoons sailing with Cal, his best friend and boarding-school roommate. When Cal commits suicide during their junior year at Kensington Prep, Jason is devastated by the loss and transfers to Bellingham Academy. There, he meets Aidan, a fellow student with her own troubled past. They embark on a tender, awkward, deeply emotional relationship. When a major hurricane hits the New England coast, the destruction it causes brings with it another upheaval in Jason's life, forcing him to make sense of a terrible secret that has been buried by the boys he considers his friends. 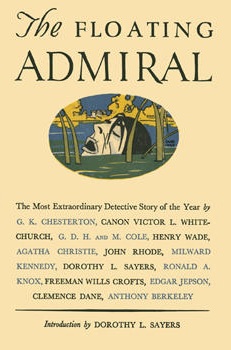 A collaborative detective novel written by Victor Whitechurch, G. D. H. Cole and Margaret Cole, Henry Wade, Agatha Christie, John Rhode, Milward Kennedy, Dorothy L. Sayers, Ronald Knox, Freeman Wills Crofts, Edgar Jepson, Clemence Dane and Anthony Berkeley, with a prologue by G. K. Chesterton. On a drifted boat, the body of Admiral Penistone is found. Last night, he had dinner with his niece in the house of the vicar. Afterwards he used his own boat to navigate over the river to his home. However, the boat on which the admiral is found is not his property, but is owned by the vicar. The admiral was stabbed by a knife or a dagger, but there is no blood on the floor. Furthermore, the mooring line has been cut. 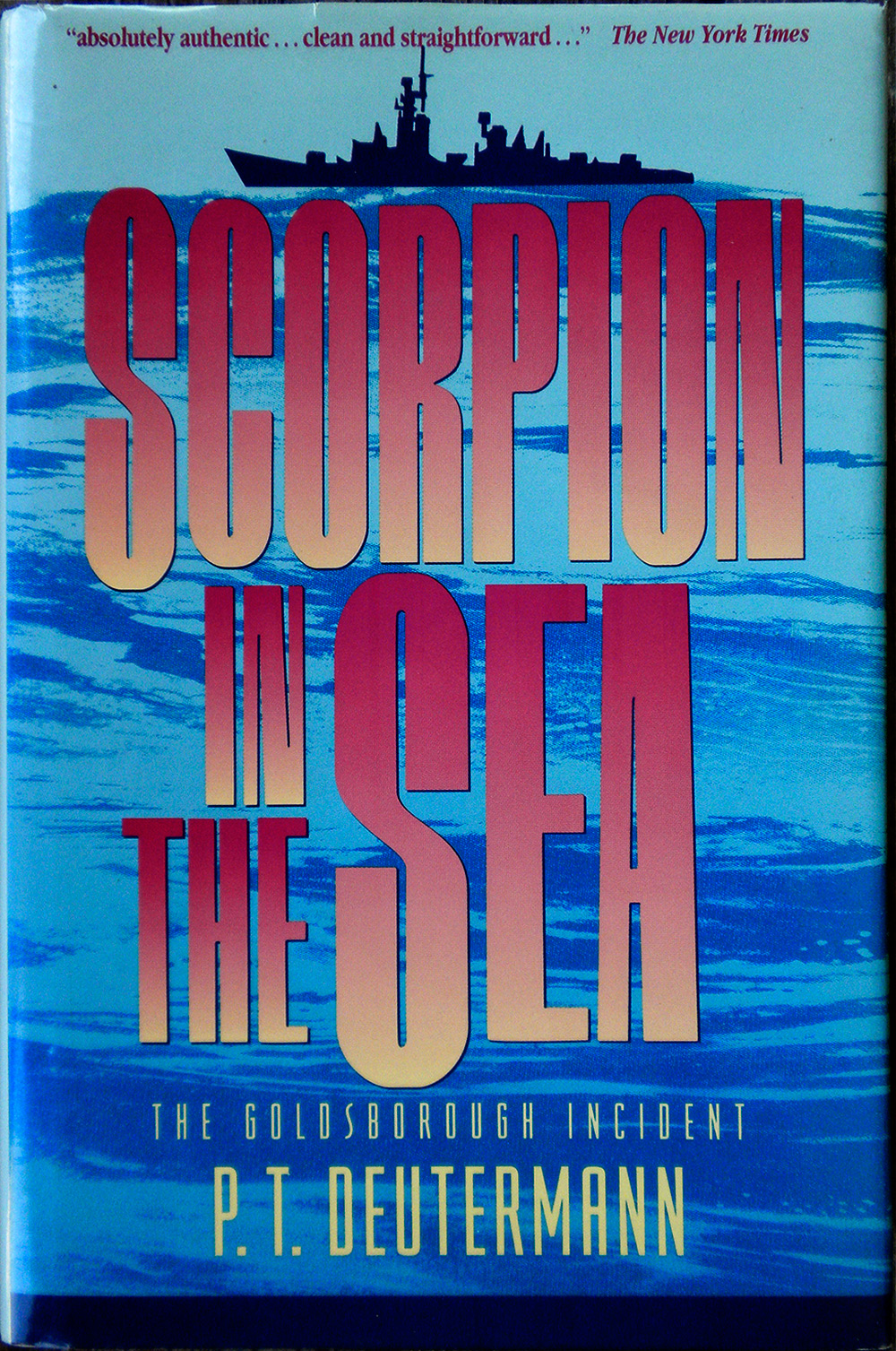 Libyan submarine seeks revenge for the US bombing of Tripoli by trying to sink the carrier CORAL SEA at her base in Florida. 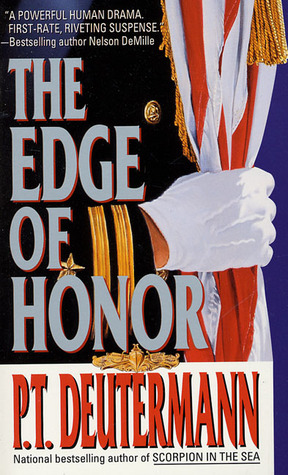 During the Vietnam War, Lt. Holcomb becomes weapons deptartment head on USS HOOD and discovers the ship is riddled with problems that make it vulnerable to air assault--problems that the ship's enigmatic captaim seems unwilling or unable to address. Holcomb must decide between ignoring the problems, and possibly endangering the ship, or doing something and putting his career in jeopardy. Meanwhile, back home, his wife is having her own problems with being left alone.< 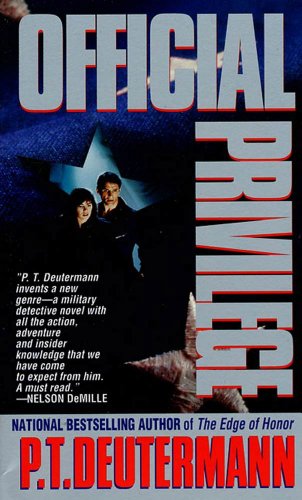 The body of a young black naval lieutenant is found, chained inside a boiler of an old battleship mothballed in the Philadelphia Naval Shipyard. Naval Commander Dan Collins and Naval Service Investigator Grace Ellen Snow are assigned to investigate the murder. Questions about the killing lead them into Washington's highest circles. 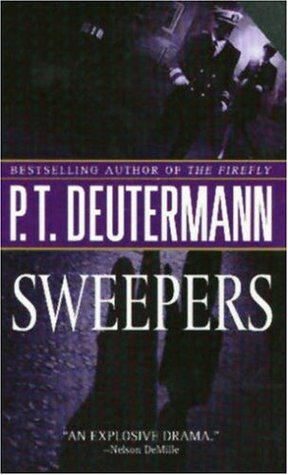 The inner ring of the Pentagon is being rocked by a Sweeper. A trained covert assassin, an ex-Seal, has gone rogue. A newly appointed Pentagon admiral is scrambling for his life and for his career. A police detective needs answers. 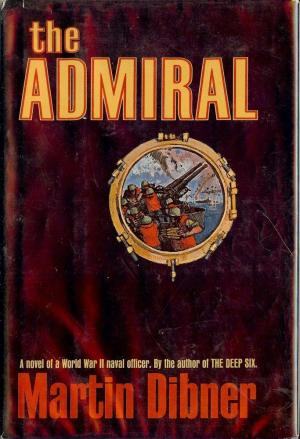 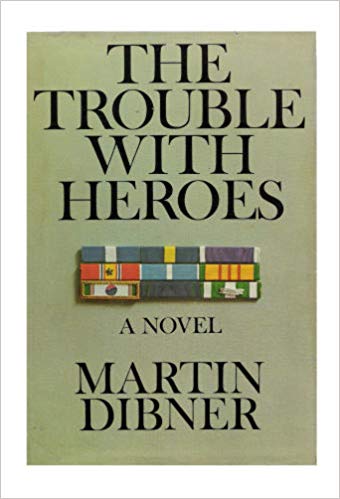 Why does the captain-hero of a US nuclear guided missile cruiser off Viet Nam refuse to carry out unjust order? 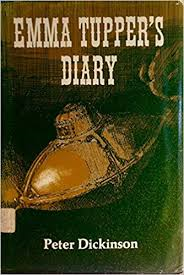 While visiting her Scottish cousins, Emma becomes involved in a plot to hoax the news media by changing the appearance of an old submarine into a sea monster. 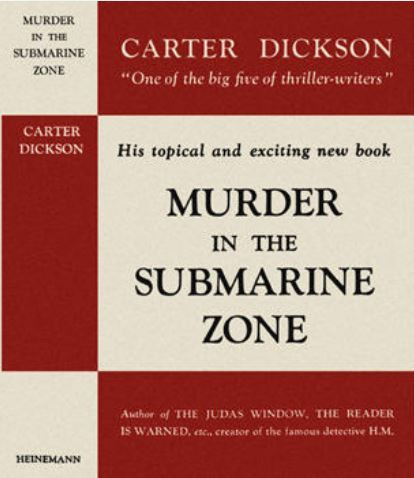 U.S. Titles: Nine--And Death Makes Ten and Murder in the Atlantic. Nine oddly-assorted passengers aboard the S.S. Edwardic are crossing the Atlantic during World War II, with the constant threat of attack by German submarines. When one passenger is murdered, apparently for a military secret, Sir Henry Merrivale must solve the mystery. But can he contend with the fact that the killer's fingerprint doesn't match anybody on the ship?