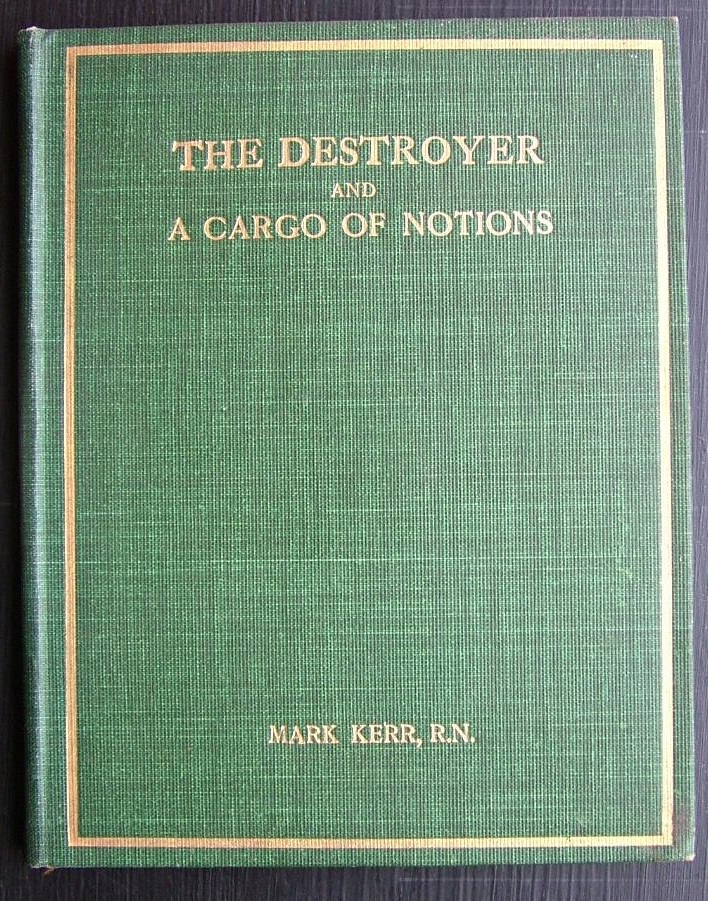 Verse from the navy of the beginning of the century by a serving officer who rose to become an admiral. Poetry is an important naval tradition as fans of O'Brian will know. 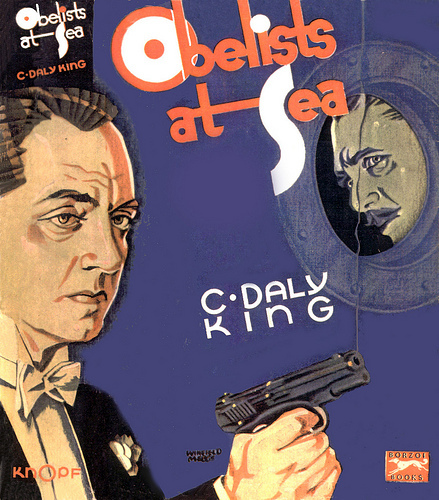 The first of a short series of detective novels featuring Capt. Michael Lord of the NYPD and Dr. L. Rees Pons, an integrative psychologist. The murder of a multi-millionaire takes place on a transatlantic liner, the SS MEGANAUT, the detective his helped (and hindered) by the theories of four psychologists. The following books take place on trains and planes.

King, Dean and Hattendorf, John B. 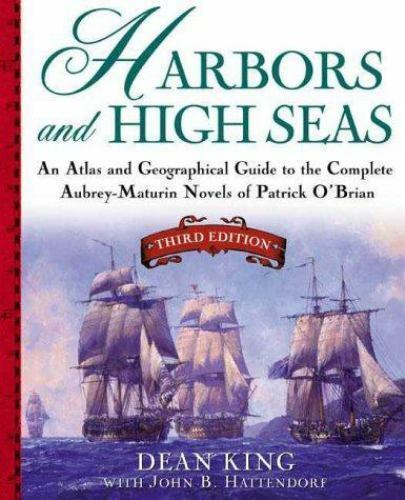 Harbors and High Seas : an atlas and geographical guide to the complete Aubrey-Maturin novels of Patrick O'Brian. Henry Holt, 2000. 258 pages

3rd edition. Find out where the factual and fictional places Stephen and Jack visit in their adventures really were. Many maps and contemporary illustrations. 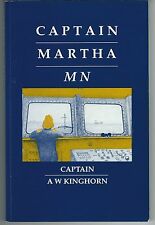 Martha Jackson becomes the first female captain of a British merchant ship. This novel is the story of her time as captain of the reefer vessel NORTHERN CASTLE. Kinghorn is himself a MN captain, recently retired, and whilst the book can best be described as undemanding it is at least techinically accurate, although the regime on the NORTHERN CASTLE is a trifle old fashioned for a merchant ship in the 1990s. Kinghorn is a regular contributor to the UK magazine SHIP'S MONTHLY with reports of his various voyages as master of a general cargo ship, trading round the Middle and Far East. The book is unusual in that Kinghorn published it himself.

Westward Ho!, or, The voyages and adventures of Sir Amyas Leigh, knight : of Burrough in the County of Devon in the reign of Her Most Glorious Majesty, Queen Elizabeth rendered into modern English. Macmillan, 1855. 3 volumes

Not strictly nautical, Tom the sooty little chimney sweep goes to live beneath the sea and encounters all the strange creatures that live there; including the water babies. Image Tom's delight then when he becomes one with the magical water babies and finds himself clean for the very first time! For young readers.


The Ocean Queen and the Spirit of the Storm. A new Fairy tale of the Southern Seas. T. Bosworth, 1851. 91 pages


Peter the Whaler; His early life, and adventures in the Arctic Regions and other parts of the World. Grant and Griffith, 1851. 408 pages

Kingston's first big success, it established the format for most later books. In the 1830s Peter Lefroy, wild son of vicar in Ireland, is sent off to sea in an emigrant ship bound for Quebec. After an horrific account of seven-day fire on board in which many die, Peter is rescued, gets to Canada, spends a few months in the fur trade, travels via Fort Dearborn (site of Chicago) to New Orleans, and goes off to sea again. His ship is captured by a pirate and Peter is forced to swear an oath of allegiance to the pirates, but successfully wrestles with his conscience to find a way of bringing the pirates to justice without breaking his oath. The pirates are captured by the US Navy and hanged and Peter joins a USN expedition to the Polar regions. His ship runs on iceberg drowning all except Peter and a few mates who are picked up by whaler and becomes members of the crew. Towards the end of the summer Peter's whaleboat is left stranded when the whaler is blown away by a storm, and the men spend the winter in the Arctic, befriended by Eskimos. Next summer they are picked up by a French whaling ship, but wrecked on the Irish coast. Peter survives, walks home, and lives happily ever after. Great descriptions of Arctic conditions, clearly based on contemporary travellers' accounts.

Infant Mark and his sister are picked up from a boat adrift in the Atlantic and adopted by a rich Anglo-Indian who raises them in India then sends them home for schooling. On his return to India Mark finds that his sister was on a ship that has vanished in the pirate infested waters of the East Indies. He goes in search of her, finds a rascally American pirate captain who explains the mystery of his origins and is captured and enslaved by Borneo Dyaks, among other adventures along the way.

Salt Water; The Sea Life and adventures of Neil D'Arcy, the Midshipman. Griffith and Farran, 1857. 371 pages

An old sailor's account of his own adventures, during times of peace and of war, in many parts of the world.

A young sailor's account of his own adventures by sea and land, the scenes being laid chiefly in South America, the South Sea Islands and Japan.

Will Weatherhelm; or the Yarn of an Old Sailor, about his early life and adventures. Griffith and Farran, 1860. 384 pages

Maritime adventures of a Shetlander before and during the Napoleonic wars.

The Cruise of the "Frolic"; or, Yachting Experiments of Barnaby Brine, esq., R.N. Sampson Low, 1860. 2 volumes

Ralph Marsden sails to the Indian Ocean to seek his brother, who has left the Royal Navy in mysterious circumstances. Ralph survives various trials by his pluck and Christian steadfastness while others succumb to drink, bad living, or bad luck. Extensive descriptions of Ceylon, Aden, and East Africa in the 1840's.

True Blue; or the life and Adventures of a British Seaman of the Old School. Griffith and Farran, 1861. 436 pages

True Blue, born on a Royal Navy ship, serves all his life at sea, participating in various notable events.


The Three Midshipmen : their adventures in the Levant and in African waters. Routledge, Warne, and Routledge, 1862. 416 pages

The first of a highly popular series, the others being The Three Lieutenants, The Three Commanders, and The Three Admirals (q.v.). These books are full of adventures all over the world.

Marmaduke Merry, the Midshipman, or My Early Days at Sea: A tale of naval adventure in bygone days. W. Kent, 1862. 254 pages

Purports to be the memoirs of a midshipman serving in the Royal Navy during the Napoleonic wars and as such is written in the first person. The varied life of a young officer (fourteen when he joins) is very entertainingly told and was probably much appreciated by the young lads it was obviously written for.


The Perils and Adventures of Harry Skipwith by sea and land. Virtue and Yorston, 1868. 290 pages

Napoleonic war period: two English lads are washed out to sea, picked up by a French privateer, wrecked in a West Indian hurricane and survive stranding on a desert key, among other trials and travails.

Our Fresh and Salt Water Tutors : a story of that good old time : our school days at the Cape. Sampson Low, Son, and Marston, 1869. 232 pages

Adventures of lads by and on the sea. Preface states that it is a rewrite of a book by an American author.

At the South Pole, or, The adventures of Richard Pengelley, mariner. Cassell, Petter & Galpin, 1870. 415 pages

A tale of voyage and adventure among the islands of the Malay Archipelago. "I have endeavoured ... to describe minutely and exactly the numerous objects of natural history which exist in ... the Malay or Eastern Archipelago" - Pref.


The Royal Merchant; or, events in the days of Sir Thomas Gresham, as narrated in the diary of E. Verner, whilom his Page and Secretary, during the reigns of Queens Mary and Elizabeth. S.W. Partridge, 1870. 483 pages

A boy's book: young Bill Sunnyside of Portsmouth, poor but honest and God-fearing, enters as ship's boy aboard the LILLY sloop-of-war, Captain Trevelyan. In the West Indies he has many adventures, during which his unfailing cheerfulness and resourcefulness help his shipmates survive hurricanes, shipwreck, marooning on a waterless islet in the Tortugas for many months, and capture by the French. They are released when Dominique, where they have been held captive, is conquered by British forces (1805).


Hurricane Hurry, the Adventures of a Naval Officer Afloat and on Shore. Griffith and Farran, 1873. 472 pages

Claims to be based on the journal of a Royal Naval officer who participated in the American war of Independence; eye witness accounts of events leading up to Cornwallis' surrender.

A Shetlander in the whaling trade.

Happy Jack: Our hero remains unflaggingly cheerful through three shipwrecks and a massacre by Columbia River indians, from each of which he is the sole survivor. Entering his father's law practice back home begins to look good after all!

The "San Fiorenzo" and Her Captain, Narrated by Admiral M--: Kingston states that this is a factual account of one ship's experiences during the mutiny at the Nore given him by Admiral Mitford. Mitford was at the time of the mutiny (1797) a midshipman under Sir Harry Burrard Neale, Kingston's uncle and the captain of the SAN FIORENZO.

Orlo and Era : A Tale Of The African Slave Trade.

The Three Lieutenants; or, Naval Life in the Nineteenth Century. Griffith and Farran, 1875. 463 pages

Fighting slaving in the Caribbean

Ralph and Dick, or, The Two Shipmates. Society for promoting Christian Knowledge, 1874. 215 pages

Uncle Boz: A Christmas tale of heroism in saving shipwrecked mariners. Other stories: My first command and how it ended -- Our first prize -- Cast away on a sandbank -- Owen's revenge -- Jack Osborne's wooing.

A young sailor's account of his own adventures, along with three shipwrecked comrades.

The South Sea Whaler, the story of the loss of the CHAMPION and the adventures of her crew. T. Nelson and Sons, 1875. 363 pages

A tale of mutiny and the shipwreck of the whaler CHAMPION in the South Seas, the Captain having his son and daughter on board with him.

Twice Lost : A story of shipwreck, and of adventure in the wilds of Australia. T. Nelson and Sons, 1876. 473 pages

A young sailor's story of shipwreck and perilous adventures.


The Voyage of the "Steadfast"; or, the young missionaries in the Pacific. Religious Tract Society, 1877. 128 pages


The Three Admirals and the Adventures of Their Young Followers. Griffith and Farran, 1878. 440 pages


Kidnapping in the Pacific, or The Adventures of Boas Ringdon; a long yarn in four lengths. G. Routledge, 1878. 173 pages


The Cruise of the "Dainty;" or, Rovings in the Pacific. Society for Promoting Christian Knowledge, 1880. 192 pages

Also published under the title The Cruise of the "Mary Rose": or Here and there in the Pacific.

James Braithwaite, the Supercargo: the story of his adventures ashore and afloat. Armstrong, 1883. 226 pages


Paddy Finn; or, The Adventures of a Midshipman Afloat and Ashore. Griffith Farrar, 1883. 430 pages

Includes three other stories : The travelling tinman by Miss Leslie, The beautiful gate, and, The chimaera

A Cruise on the Mersey or, twelve hours' missionary work among seamen. Griffith & Farran, 1857. 26 pages


From Powder Monkey to Admiral : a story of naval adventure. Hodder and Stoughton, 1883. 400 pages