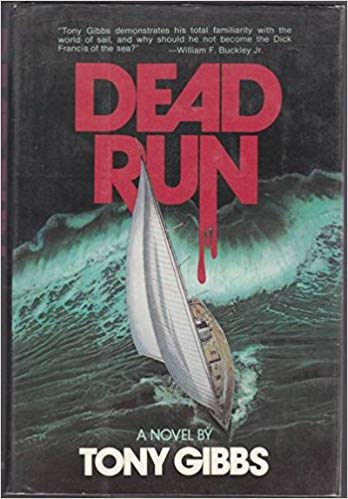 "This sailing thriller employs an old but servicable plot: both good and bad guys chase after an unidentified hidden treasure on an old sailboat, Glory. Gibbs knows and loves sailing, but the novel itself is pretty thin.." [Library Journal] 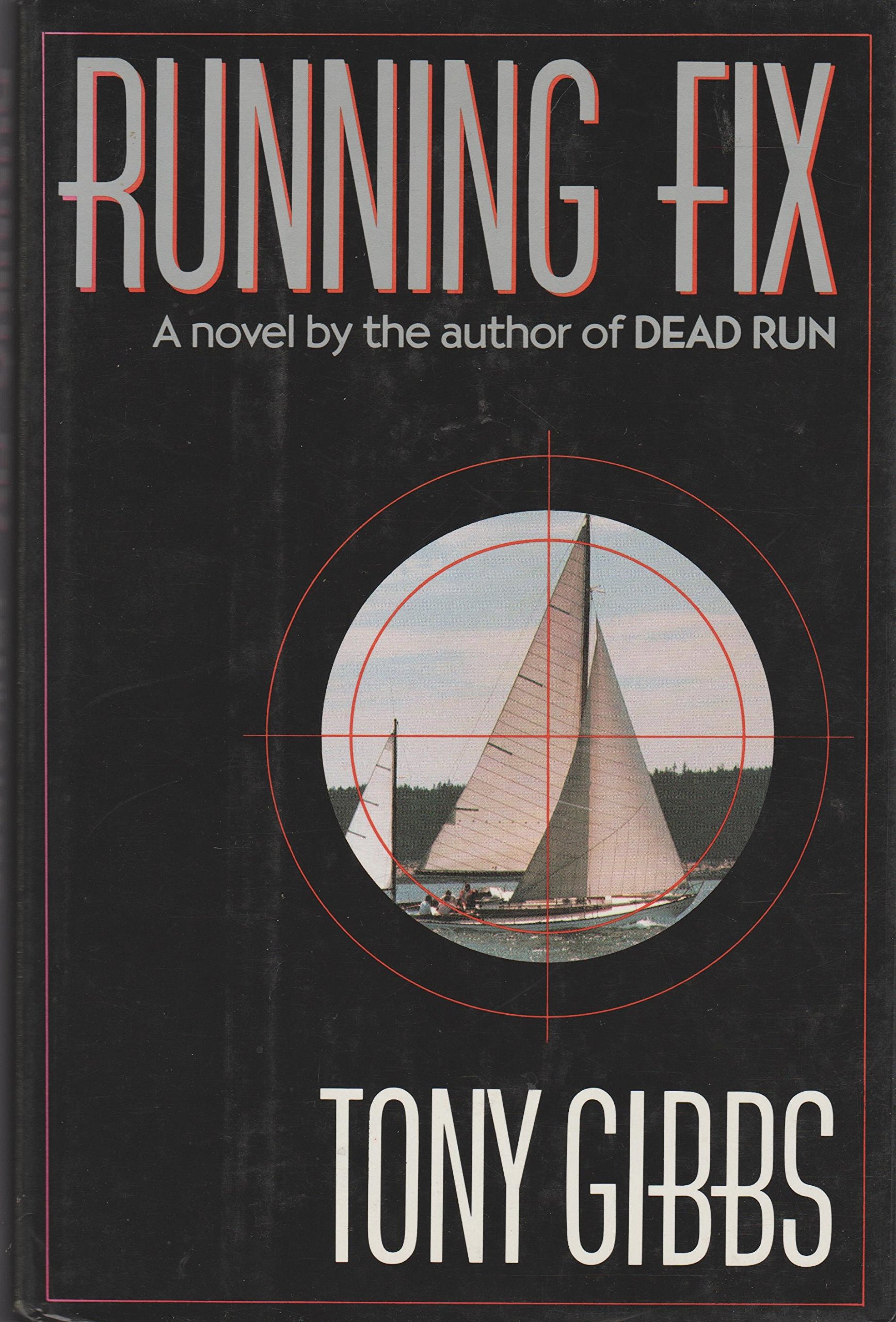 "...Gillian Verdan is a young woman of good breeding whose diminished circumstances have obliged her to charter out her family's magnificent yacht, GLORY. Her crew includes crusty Jeremy Barr, an old salt whose loss of wife and ship have left him high and dry emotionally, and Patrick O'Mara, a lusty young ex-mercenary whose working-class Catholic background puts him at a disadvantage among the snobbish gentry with whom he sails" [PUBLISHER'S WEEKLY]. Gillian searches for her college room mate, lost at sea with her editor boss. She and her crew run into a tangled web of intrigue and danger. 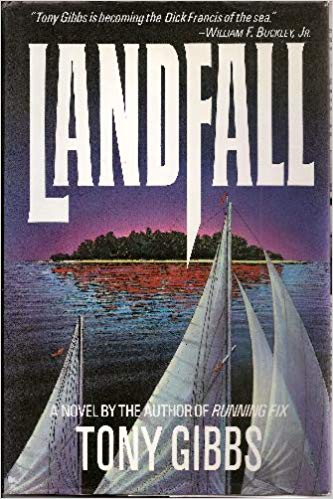 "...Jake Adler, a military man with connections to a dubious right-wing organization, charters the yacht GLORY and involves its owner Gillian Verdean, the captain...Jeremy Barr, and the cook Patrick O'Mara in a clandestine operation on the fictional Caribbean island of St. Philip....Lush locales, and extensive, but not overdrawan, seafaring lore add to the reading pleasure." [PUBLISHER'S WEEKLY] 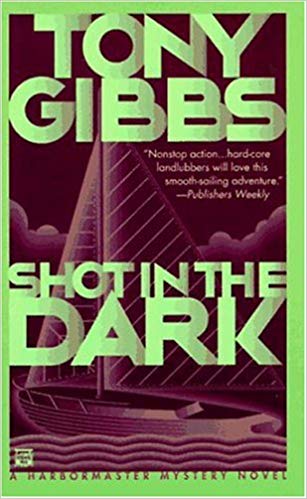 Gibbs launches his new "Harbormaster" series which features low crime on the high seas in the Santa Barbara area. Lots of on the water action. 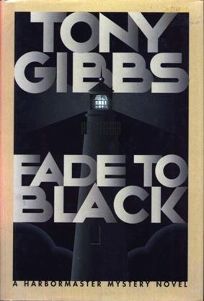 Neal Donahoe walks the piers of Santa Barbara as the town's acting Harbormaster. And Coast Guard Lieutenant Tory Lennox, the newcomer on the dock, is beginning to feel a part of the floating world that makes up the city's marina and her beat. Nevertheless, Neal and Tory have their problems. Tory's reputation is frozen in mud, and she seems doomed to wither quietly at her post. What's more, she and Neal are at personal loggerheads. He's pushing for marriage, and Tory's not sure what she wants. Enter Erling Halvorsen. Erling - family man, self-declared minister of God, and skipper of the Prophet Jonah, a maritime eyesore on Santa Barbara's pristine shoreline - finds an angel in Tory, who is touched by the plight of the Halvorsen clan. When Tory's boss lowers the boom and orders the boat our of the harbor, she befriends the Halvorsens and helps them move. For Tory, it's a simple act of kindness. For Erling, it's a celestial sign. He has found the one. Meanwhile, Halvorsen's eldest son is a delinquent dock rat who just happens to be around when local painter Wilbur Andreas is blinded by acetone. Martha, the oldest daughter, is quietly rebellious but obviously terrified of her father. The three remaining children are wise beyond their years. And Erling's righteous zeal masks a rage that can consume everyone he loves - including Tory. Finally, in a single act of apocalyptic daring, the storm erupts. Caught in its center, Tory will need all the courage she can summon to prevent a bloodbath. And, trapped at its outermost edge, Neal must race against time to save both the woman and the world he loves. 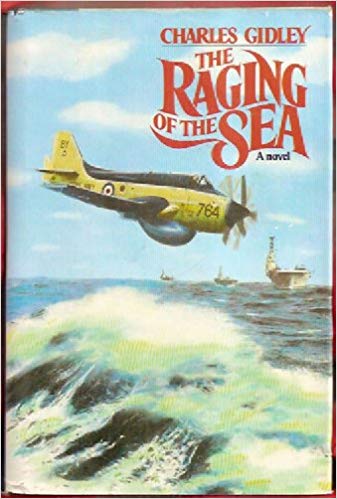 The son of a Royal Navy officer whose father died a hero in WW II joins the post-war Royal Navy as an officer, becomes a pilot. 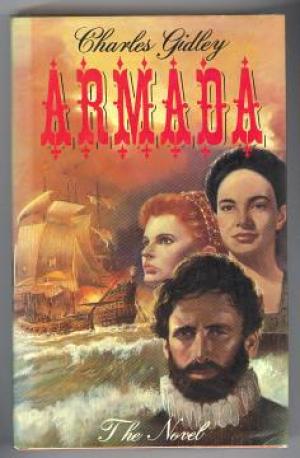 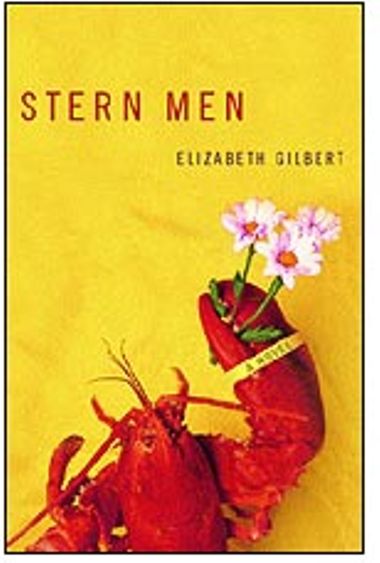 Ruth Thomas returns from boarding school to join her family in their Maine island lobster fishing business which is in a age-old fishing feud with other local lobstermen. 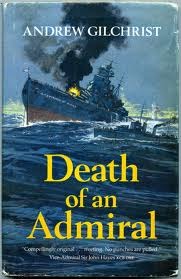 In this novel the author gives his explanation for the events of the nine fateful days between Admiral Sir Tom Phillips' arrival in Singapore to assume command of the British Force Z and December 10, 1941. On this day the Admiral was lost, along with a thousand other men when the Japanese sank the British battleships HMS PRINCE OF WALES and HMS REPULSE in the South China Sea.

Dipsomaniac Scots Chief Engineer Glencannon makes life difficult for Captain Ball and everyone else aboard the British tramp steamer INCHCLIFFE CASTLE, especially First Mate Montgomery. Duggan's Dew of Kirkintilloch, "most gorgeous of all liquids that ever dripped golden from the nozzle of a still to mingle its perfume with that of the heather in the cold highland mists", leads Glencannon into and, amazingly, sometimes out of, all kinds of trouble. 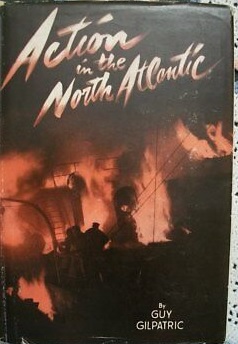 A Liberty Ship heading for Murmansk during WW II becomes separated from the rest of the convoy. Published in conjunction with the Warner Bros film. 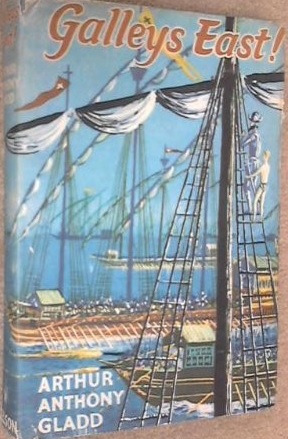 Greek-Venetian lad, forced to become a sponge fisher after his father's disappearance, meets Miguel de Cervantes, finds Barbarossa's treasure, gets shipwrecked by a storm, captured by the Turks, and forced to become a galley slave. Escaping from the Turks, he goes to the Holy League fleet camped outside of Lepanto, warns them of a Turkish trap, and fights at the battle of Lepanto alongside Cervantes, rescuing his father and restoring the family fortune. Seems more plausible as you read the story, than when you encapsulate it. 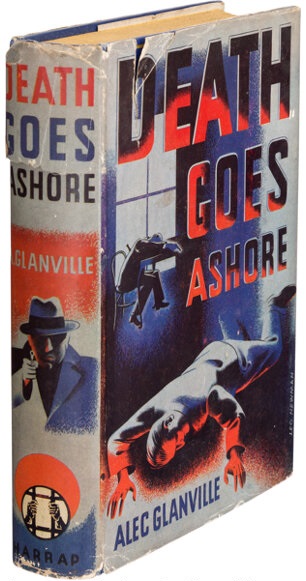 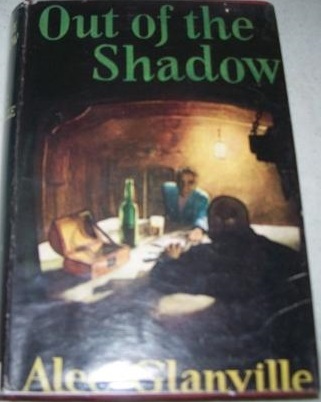 Robin Fraser, one time submarine commander and Japanese prisoner of war is down on his luck. Then he is asked to participate in the recovery of treasure from a ship sunk during the French Revolution and accepts the job. The story of the salvage operations is hair raising in itself but in addition there is a story of intrigue and double dealing and finally of murder. 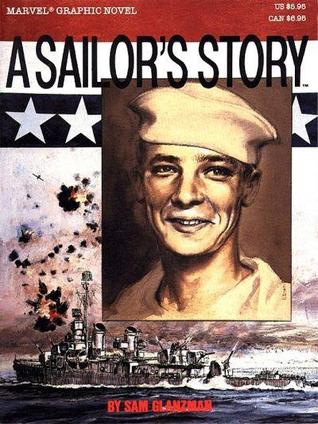 Graphic novel about service aboard a FLETCHER class destroyer during WW II. The ship was equipped with a catapult for an OS2U Kingfisher aircraft. "...very well done, and very evocative of a sailor's life on a 'tin can' in the Pacific." 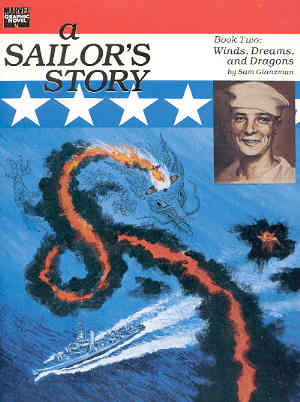 A Sailor's Story, book two. Covers the kamikaze period of WW II in the Pacific in more detail. 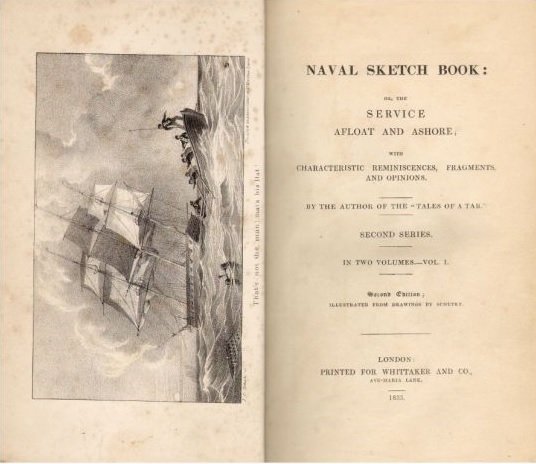 Naval Sketch-Book; or, The Service Afloat And Ashore : with characteristic reminiscences, fragments and opinions on professional and political subjects. H. Colburn, 1826. 2 volumes

"...A curious olla-podrida of 'galley' stories, criticisms on naval books, and miscellanies,... It is not very well written, and is in parts very dull, but provides some genuine things." [Saintsbury's Nineteenth Century Literature] 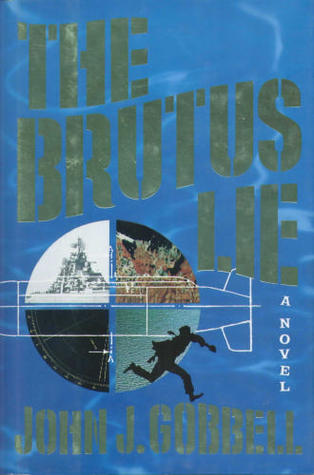 Reunited after thirty-five years of Cold War, brothers and bitter enemies Lofton and Dobrynyn pursue their individual goals of outwitting each other, unaware that their deaths have been ordered at the highest government levels. Much of the action takes place on submarines. 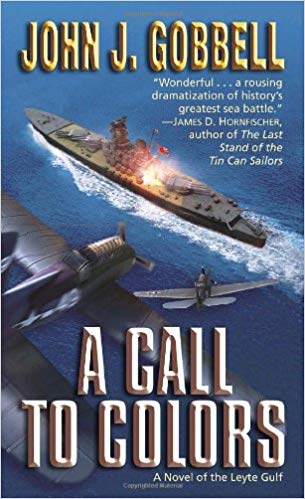 Commander Mike Donovan is a veteran haunted by earlier savage battles. What Donovan doesn't know is that Vice Admiral Takao Kurita of Japan has laid an ingenious trap as the Matthew heads for the treacherous waters of Leyte Gulf. But Donovan faces something even deadlier than Kurita's battleships: Explosives secretly slipped on board American ships by saboteurs are set to detonate at any time. 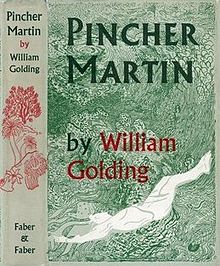 Torpedoed RN officer washes up on a barren rock in the middle of the Atlantic. Strange.

To the Ends of the Earth trilogy: 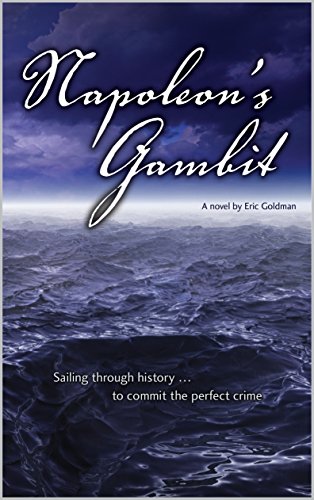 A modern sailor is recruited by the Royal Navy and finds himself on the deck of HMS Impérieuse in 1813, as she sails into battle against overwhelming odds. At stake are $5 billion in gold and the fate of the modern world. 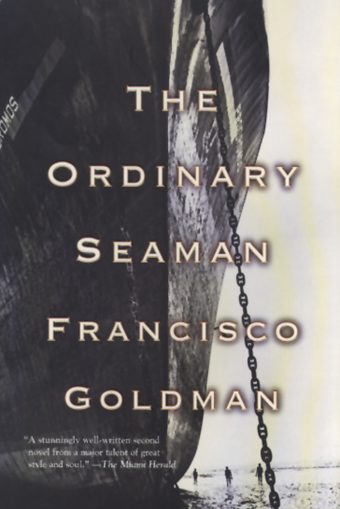 Fifteen desperate men lured from Central America by the promise of work aboard a freighter find themselves trapped on a rusting, rat- and roach-infested hulk without plumbing, heat or electricity, abandoned at an isolated Brooklyn pier. Placated by the promise that they will eventually be paid, the crew work for six months under horrifying conditions: half starved, filthy, sick and humiliated, they're victims of their own poverty and the chicanery of others. 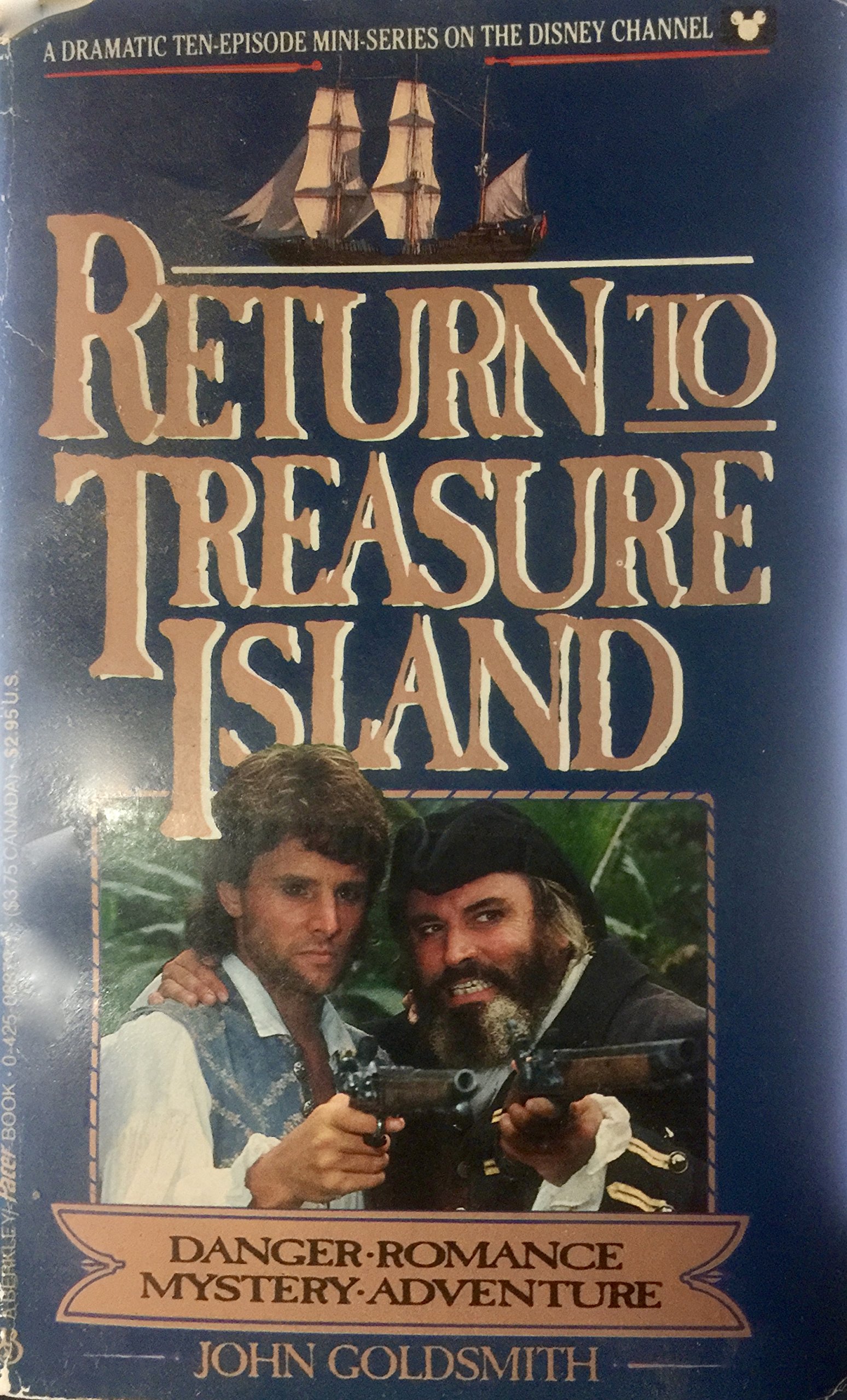 Jim Hawkins, now an adult in the employ of Squire trelawney, is set to travel to Jamaica to discover why the Trelawny's estate there is not making money when Long John Silver resurfaces. It seems that Silver is after the rest of Flint's treasure left behind on the first expedition, and the key lies in Jim's map. Naturally, Trelawny's estate manager -- and his partner, the Governor of Jamaica -- are cheating Trelawny, and know about the treasure map... need more be said? 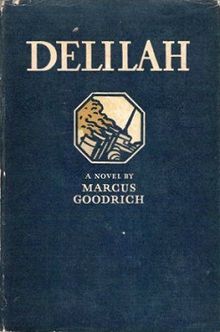 Life on an early US destroyer on the eve of World War I. Much of the book constitutes detailed descriptions of various characters, punctuated by plot developments associated with the ship's mission in general support of maintaining order in the southern islands of the Filipino archipelago, populated by Muslim natives dissatisfied with the center of government in the northern island of Luzon. The relationship between the enlisted men and the officers on board the Delilah receives special treatment. This relationship can be seen as a logical link between the strict stratification of naval personnel in the age of sail and the more egalitarian navy that emerged following World War II.One of the great classics of naval literature. 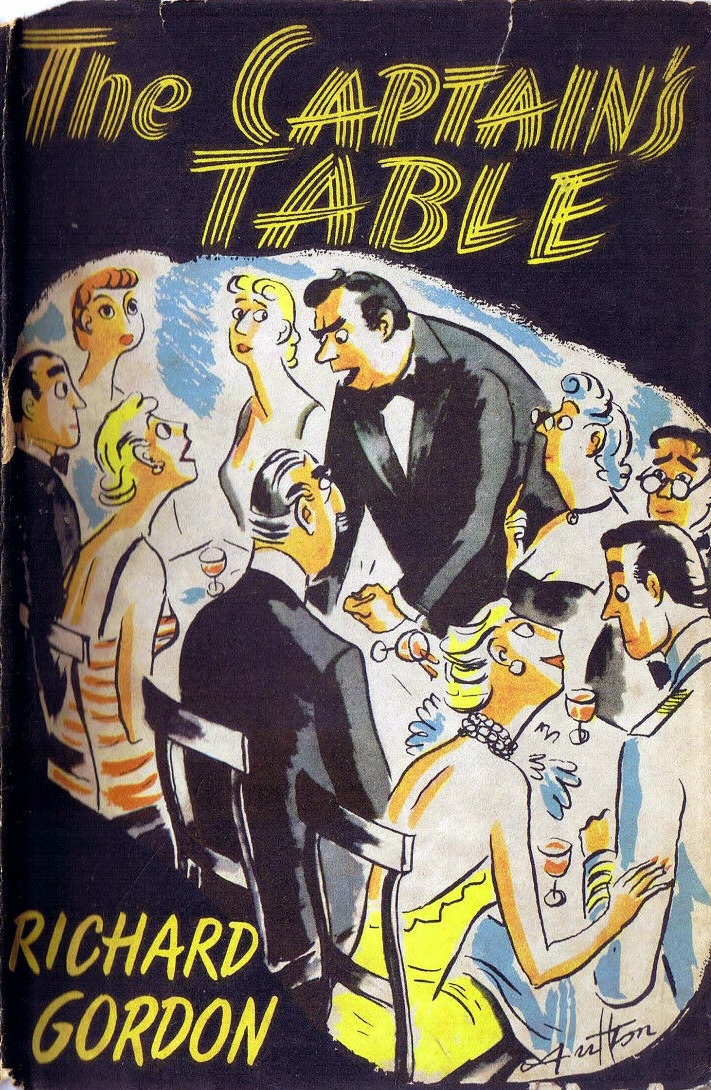 Rough diamond cargo ship captain is given command of the company's passenger ship. 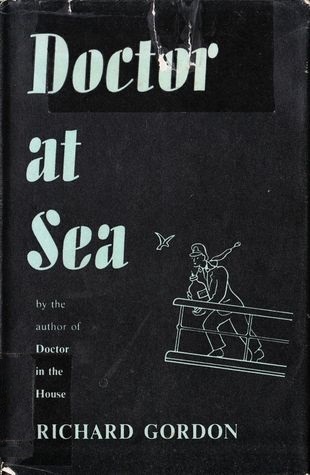 A newly qualified doctor signs on as ship's doctor in a merchant ship for a voyage from Liverpool to South America and back. Loosely based on the author's experiences as a ship's doctor. It was filmed with Dirk Bogarde as the doctor and James Robertson Justice as the ship's captain. 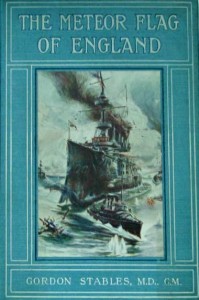 Written for boys and set in 1980-1! The French, the Germans and the Russians invade Britain: The French the South, the Germans and Russians Scotland. The technical advances are a bit out to say the least, 300 knot coal burning ships and giant subs etc. But underlying all this the author was greatly concerned about the vulnerability of Scotland to invasion because of the governments parsimonious attitude to modernising the fleet and in his work with youth (boys) organisations he advocated they should be encouraged to shoot and own rifles to defend the country in that event. 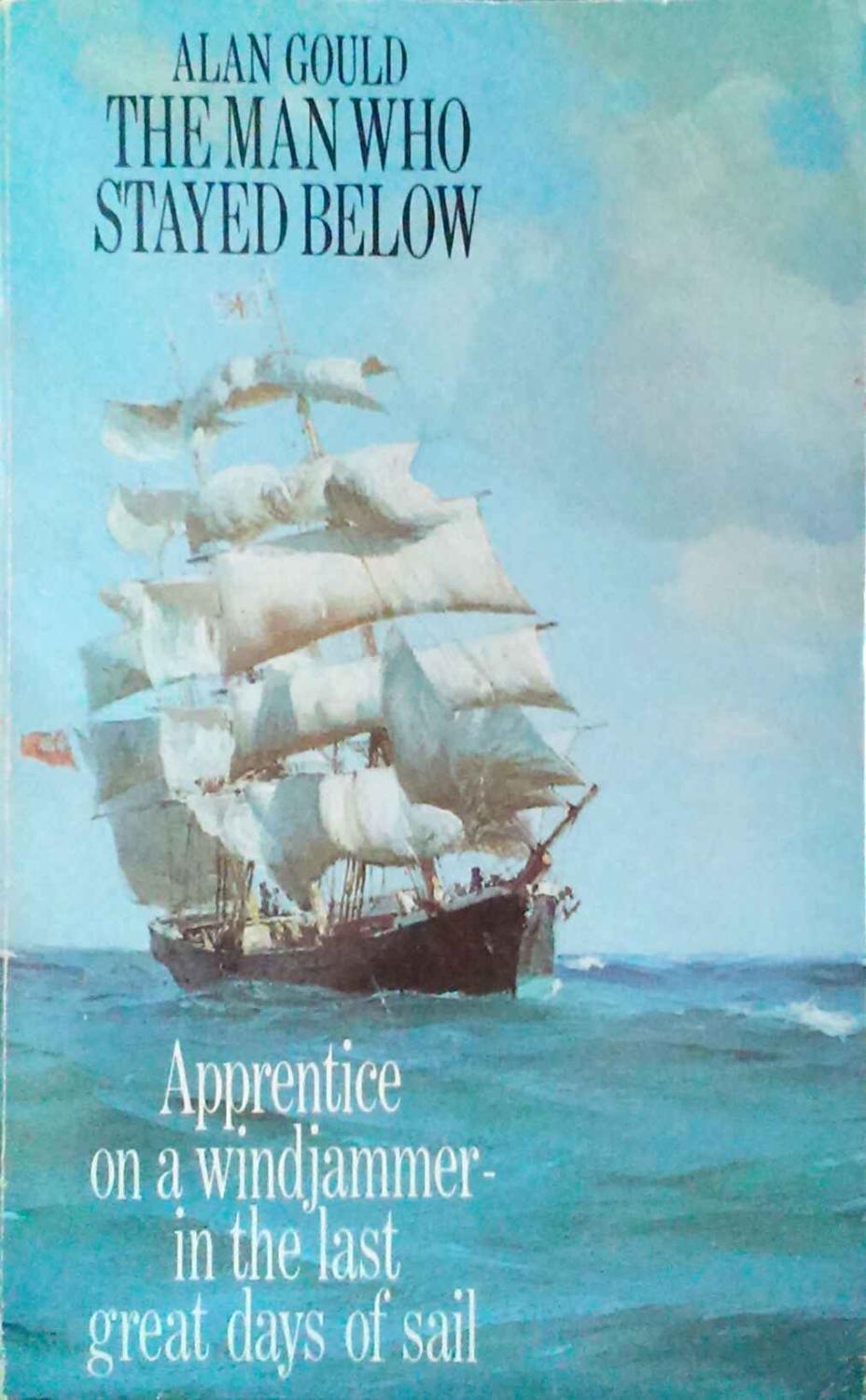 A raw 16 year old apprentice is on a wool clipper from Melbourne bound for London via Cape Horn. He is intoxicated with the glamour of the sea and ships until he encounters the malign Captain Trygg.